Northern Ireland has a habit of producing striking images. During the Troubles those images were often of terrible things; the aftermath of explosions and shootings, funerals, masked men making threats. Until last Saturday, when I watched the RTE documentary Shooting the Darkness at QFT, I had never thought about who was holding the camera during these famous moments.

Shooting the Darkness is about the group of photographers who covered the Northern Irish conflict. The men, and they are all men, share an enthusiasm for the power of photography, a reverential attitude towards the truth, and a black humour about the personal cost of the covering traumatic violence. Director Tom Burke has largely let the men speak for themselves,  and so the archival footage and images that are shown to the audience are contextualised by men who were there. As discussed in a previous post, I think that the troubles story is quite vulnerable to repetition and cliché, and so by finding a group of men who were omnipresent in the troubles but without articulation for much of it, Burke has found a new way to tell a familiar story. 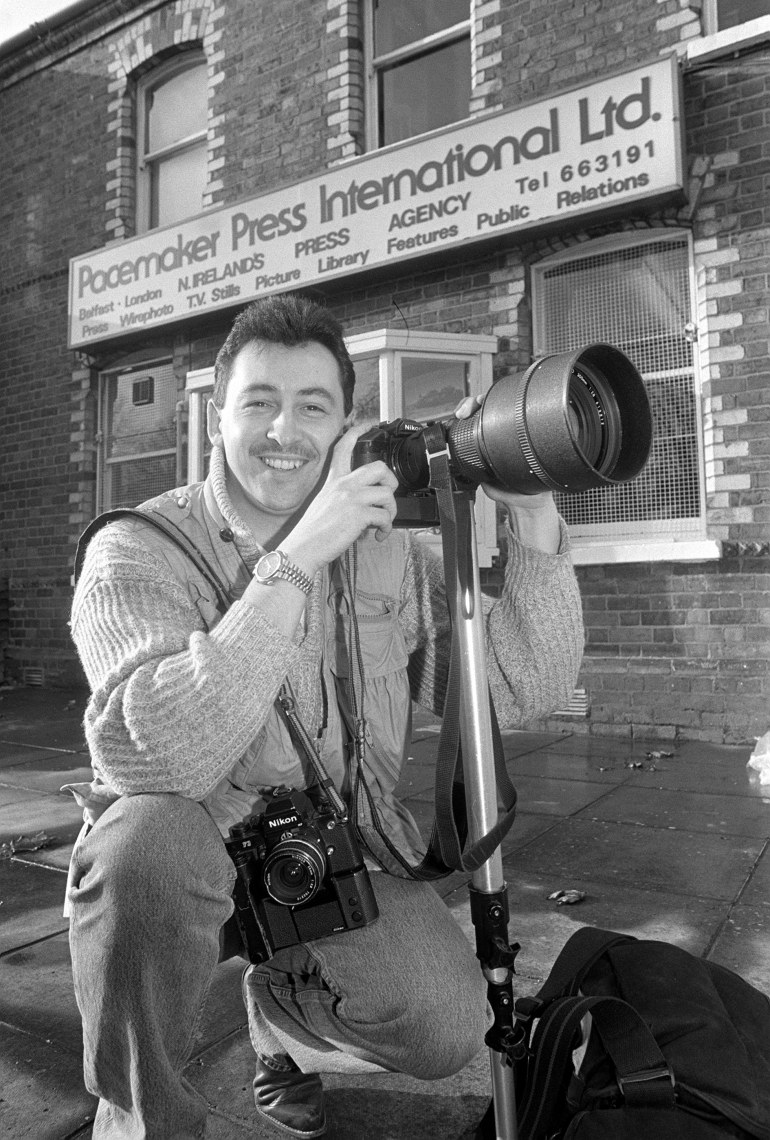 What I found most interesting in this film was the photographers experience of trauma. Both in the film, and during the Q and A that followed the screening, the men were quite restrained when talking about  about the personal costs of a grim job. They joked about times they had received death threats, and told of tricks to avoid angry men with guns getting a hold of your film.

There were, however, a couple of moments when this professional and ironic detachment broke down. During one memorable scene, Alan Lewis speaks about his fear that he was growing too detached from the horrific images that he was seeing, able to rush to the latest atrocity, capture his images, and then to develop his photographs, all without becoming emotional. Other interviewees spoke about the camera as a sort of shield; that by viewing these terrible things through a viewfinder they were able to detach themselves from a visceral and emotive experience of the violence.

The use of a camera as a psychological shield calls to mind a scene from another great (quasi) documentary of warfare, Waltz with Bashir. One of the animated interviewees in Waltz is an Isreali psychologist who explains how veterans of the 1982 war with Lebanon dealt with the mental strain of war. The psychologist tells of one solider whose coping mechanism was to imagine that he was filming the whole war for a TV documentary – to pass the images from his eyes through a kind of imaginary filter and view them as TV footage. The veteran was in this way was able to prevent the reality of war from penetrating his mind.

The problem with mediating the sight of violence through a real or imaginary camera lens is that the ploy will, eventually, fail. The Israeli veteran’s imaginary camera ‘broke’ when he saw a group of slaughtered horses decaying in a Beirut street. Something about the inhumanity of animals, their utter lack of responsibility for war, was too much of a strain on the mental viewfinder, and he collapsed into tears. Similarly, Alan Lewis relates how he broke down and wept while developing photos of schoolchildren hurt in an Belfast explosion. Lewis explains that was relieved to cry, as it proved to himself that he had not lost all human feeling.

Shooting the Darkness will be on UK screens shortly, and I hope I’ve done a good job selling it to readers. It is a great short documentary, one succeeds in making well-known images very fresh. It also succeeds in communicating the horror and pain of warfare, and the confusing experience of trauma.